PIPENET: a Snapshot of Our History

Home/Latest News/PIPENET: a Snapshot of Our History
Previous Next

PIPENET: a Snapshot of Our History

PIPENET is the leader in rapid fluid flow analysis, widely used and specified by the largest and most progressive companies in the world. Looking at its comprehensive functionality and the complexity of networks designed and simulated in PIPENET today, it is difficult to imagine what PIPENET looked like when it originally came into existence.

Year 2017 marked the 40th anniversary since PIPENET was initially developed at the University of Cambridge in the distant 1977. Some of the first machines on which PIPENET was run were bulky mini- or mainframe computers. Calculation results could be seen on a visual display unit, or VDU, connected to the minicomputer by a cable. One of such VDUs is proudly kept at the Sunrise Systems Limited office: 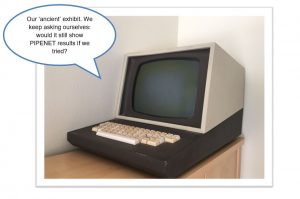 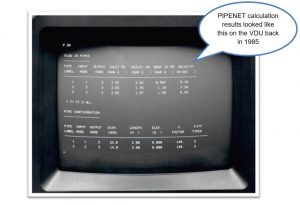 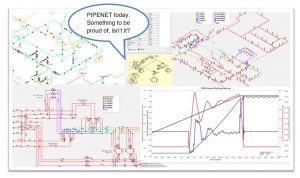 Some of our customers have been using PIPENET for more than 30 years. Do you have any PIPENET memories or pictures to share? We would be happy to hear from you!

About the Author: victoria

Page load link
By clicking “Accept All Cookies”, you agree to the storing of cookies on your device and to the associated processing of data to enhance site navigation, analyze site usage, and assist in our marketing and performance efforts. Read our Privacy & Cookies policies. Accept All Cookies
Go to Top